As We See It

The NY Times & Its Fetishes

The New York Slimes focuses a disproportionate amount of attention on Israel, and promotes a disparaging image of the Jewish state...

The former Iranian foreign minister Javad Zarif remains one of the key charlatans behind the Iran regime’s diplomacy...

Unclear why every time there’s an explosion at an Iranian nuclear facility, anonymous senior U.S. officials let it be known that the US is not responsible and insinuate...

The Saudis recognize Jewish connection to the Temple Mount and Jerusalem, despite what the Palestinian narrative alleges....

The latest stunt by the Biden administration is having the US State Department offer a grant of $1 Million to report on Israeli human rights violations.

"Mr. Netanyahu is one of the most media-savvy politicians on the planet. On Friday he appeared live via video link on 'Real Time with Bill Maher,' taking the host’s alternately sardonic and serious line of questioning with gazelle-like alacrity." 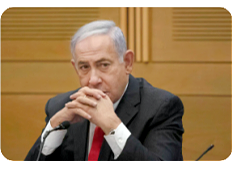 ~  Anthony Grant, jourrnalist who has written for many major newspapers and worked in television at Paris and Tel Aviv, interviewing former PM Benjamin Netanyahu on Monday, at the outset of Mr. Netanyahu's new book (more here).